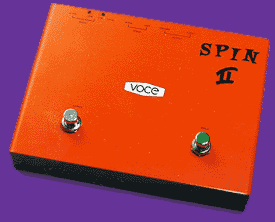 SPIN II is the successor to our highly regarded SPIN rotary speaker simulator. It accurately duplicates the effect of a rotating speaker cabinet "mic'd" with up to four microphones (two for the horn and two for the lower rotor). SPIN II utilizes the same rotor simulator technology used in the original SPIN and the V3 Tone Wheel Organ Synthesizer. However, we made some important changes and improvements. SPIN II is a "stomp box" version of SPIN that utilizes a simple and intuitive user interface allowing you to start using it as fast as you can plug in the power and audio cables.

New features included in SPIN II are foot-switches for bypass and rotor speed, controls to adjust acceleration, slow and fast rotor speeds, selectable input level allowing SPIN II to be used with guitars as well as keyboards and an adjustable output level for interfacing to sensitive guitar amps. Other features include stereo outputs, small footprint, and direct AC line power (no wall wart!)

With their compact size, ease of use, authentic sound, and great price, the V5+ and SPIN II are an ideal combination.

Specifications subject to change without notice.